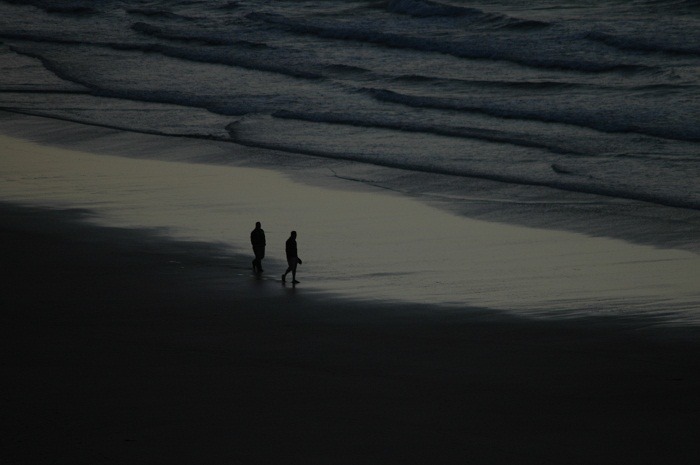 Sometimes our exercise is a walk down the beach. Other days it is online dancing where I am apparently a complete embarrassment even though no one is watching.

When we were walking down the beach yesterday, we saw two police officers come down through the dunes in their day-glow vests. We had not seen police on our beach before. The authorities had ramped up police checks over the Easter weekend, ensuring people were not driving for walks. Rather than questioning beachgoers, the two officers proceeded to draw giant hopscotch squares in the sand and then play hopscotch. We walked past them without being questioned.

Since we danced today, tonight I take the dog for a walk down the beach. All the streetlights are blazing like a normal night but the streets are empty. I try to pretend it’s after a zombie apocalypse, but disappointingly it just seems more like Christmas day night: everyone away on holiday except a few lonely souls. If it was Christmas day night at least there might be one drunken fool stumbling home like a zombie that I could have daydreamed about.

The walk is along the beach is towards the airport where there is usually a procession of planes taking off at regular intervals. Tonight there are only two private jets taking off. Perhaps carrying PPE that billionaires have generously donated using the millions they don’t pay in tax. Or perhaps it’s just billionaires going where billionaires like to go. Like to Davos. Or to tax-free havens. Or perhaps they carry National Party politicians flying private to avoid infections from economy. All in the name of the economy.

Beyond the airport is the sewage treatment station. The pipe that carries it’s sewage-sludge to the landfill has broken so there is a constant procession of tankers passing along Lyall Bay Paradeat regular intervals. One every 10 minutes. 24-hours a day.

They are an essential service.

One contractor has named their fleet the “Turd Taxis” and uses the colour scheme of NY yellow cabs. Another is a converted milk tanker, which just seems so wrong. At least they got it the right way around, and hopefully the tanker won’t return to the milk run once exports pick up again.

The trucks drive to fast. They must be paid by the load. When they pass there is a faint whiff of faecal material. It last just long enough for you to register it – “What’s that smell? Jesus that smells like…” – and then it’s gone.

Before Covid-19 when the parade was packed with people out enjoying the seaside, I imagine the drivers were also enjoying themselves by drawing attention to their trucks by driving too fast, and then appalling bystanders with that smell.

I know if I was driving a Turd Taxi I would have enjoyed that.

I feel sorry for them now as there is no one to disgust. The streets are silent as are the living dead.