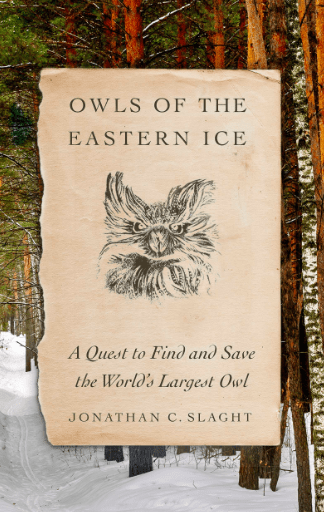 September 29, 2020 by Contributor No Comments

A book about owls? Sure, owls are cute, they’re cool, they’re even interesting—but read a whole book about them?

Okay let me put your mind at rest: first, this is a book about the study and conservation of not just any old owl but the world’s largest: the Blakiston’s Fish Owl of the Russian Far East . This species is found only in the mountains and valleys along the Russian Sea of Japan coastline, in Hokkaido, Japan, and perhaps in a small corner of northeastern China. And equally as important, when a book is about nature conservation, it’s almost never exclusively about the natural history and ecology of that species alone. What you get in Owls of the Eastern Ice is so much more—colorful and often hilarious portraits of vodka-soaked village life in remote outposts, adventures involving gunning cars across raging rivers at just the right angle in the hope that the current can carry the vehicle downstream and land it on the other side where the washed-out road should be, and jungle dramas involving tigers, deer, and, of course, the topic at hand: the Blakiston’s Fish Owl.

The owl, in addition to being huge and having a dietary preference for feasting on the fresh masu salmon of remote Russian rivers, must be one of the worlds most beautiful birds. Its “electric yellow” eyes blaze from beneath of pair of pointy, tufted ears on a body of luxurious and billowy, creamy-brown feathers that seem like they could hide a person’s body.

At one point the author, Jonathan Slaght, climbs a tree to have a look in a nest, flushing the “glowering” female in the process. He conducts a quick check, photographing a newly hatched chick, and twenty minutes after he’s back on the ground and, he thinks, a safe distance away. Then, turning his binoculars back to the nest and its mother finds himself “meeting her direct stare at ten times magnification.”

Personally I relished Slaght’s portraits of the eccentric Russians living in this little-visited corner of the world. He meets hermits who sleep in wooden pyramids for the alleged “power” that can be (so they say) harnessed by dozing off in these Egyptian-like structures, while also encountering many scenes in which the effects of vodka have intoxicated the entire population of a village.

In one episode told by the author—who has dedicated his live to the study of the bird—his scientific team drive by a home in which a man is shouting from behind the glass of his living room window, gesticulating and jabbing desperately in the direction of the home’s front door. Slaght’s friend and fellow researcher Sergey reluctantly unlock the front door—from the outside—and: “The man exploded out like a long-caged beast. The jerky, frenzied motions of his dash past Sergey, through the yard, and into the street indicated a mind too hysterical for any coordination.” Sergey explains moments later: “His old lady locked him in so he wouldn’t go drinking.”

I attended Slaght’s 2017 talk on tigers, leopards, and the Blakiston’s Fish Owls in Minneapolis in 2017, and his passion and dedication helped to spur my interest in birds. Back in January this year, before Covid-19 disrupted international travel, I was in the mountainous jungles south of Lake Toba in Sumatra, where we encountered four massive, critically endangered Helmeted Hornbills, which we both heard and saw. It was a rare privilege and an exquisite pleasure to hear this species’ maniacal call-cackle overlaid onto the primal growls of Rhinoceros Hornbills gliding in to a perch, along with the frenzied chants of Siamang gibbons, somewhere in the distance. Indeed, these days when I’m in the field I find myself equally excited to spot birds as I am to discover what type of mammals that have appeared in front of our camera traps.

Owls of the Eastern Ice was recently “long-listed” for the 2020 National Book Award, and I feel that now, more than ever, when tens or hundreds of millions are shuttered up in lockdowns amid the pandemic, that this is the time to learn about the mysterious and little-known fellow creatures of our planet; to explore from home about far-flung regions where creatures such as the Blakiston’s Fish Owl live. It is also the time to learn about, cherish and reignite our love for local wildlife—something my son and I did as we bought binoculars and spent many a morning and afternoon birdwatching in the suburbs of Buffalo, New York state, earlier this spring. Maybe, just maybe, with books like Slaght’s to read, and with extra time to appreciate the natural world, we’ll all come out of this the better—both people and the planet.