A Smiling Idiot in an Indonesian Village 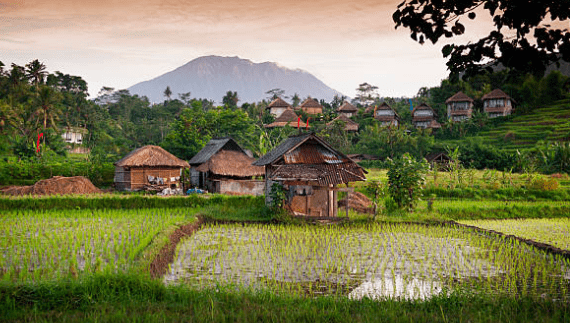 November 11, 2021 by Contributor No Comments

I had never been completely on my own, relying entirely upon myself, until I travelled overseas in my early twenties. Being alone among people I did not know, while also realizing that no one knew exactly where I was, gave me a euphoric sense of freedom. I was keenly aware of the feeling because it was so intense that at times I wondered if I might not be going a little bit crazy: I would catch myself with a silly grin on my face, not a look of joie de vivre, but unadulterated joy like the smiles of Evangelical Christians who have clearly been provided with all the answers, and are so ecstatic about the lack of uncertainly in life, that they use facial expression to share this feeling with the entire world.

This monstrous happiness would usually coincide with me being not entirely certain where I was, but not lost, because I was exactly where I wanted to be. To onlookers I must have appeared like just another stoned backpacker, but I was as straight as a die, just thrilled by the process of breaking a mould that no longer quite fitted.

While in the throes of my newfound freedom, I would play this little game when I arrived in a new town. I would ask myself, ‘What kind of person will I be today?’

To go along with my chosen personality—be that an introvert, an extrovert, or whatever took my fancy—sometimes I even adopted a new name, but that became complicated when I met people I wanted to stay in contact with. To avoid the embarrassment of explaining to those people why I was not who I said I was, my name changing became confined to my first and middle names: some days I was John, some days I was Ross, and  occasionally I was even John Ross.

Such feelings of freedom reached their zenith one morning when I was on a local bus travelling between two provincial towns in Central Sulawesi. I was looking out the window at what seemed like the middle of nowhere when all of a sudden I shouted, ‘Stop!’

The people on the bus seemed surprised and somewhat bemused that I would want to stop in such a place; there were no houses or people anywhere in sight. The bus driver kept asking me if I was sure I wanted to get off.

Up until that point in my life, a rural road in Central Sulawesi was the most out-of-the-way place I had ever been.

After the bus roared off and the dust settled over a natural stillness, I noticed a small track on the uphill side of the road. The track was clearly not suitable for larger vehicles, but there were signs that motorbikes and oxcarts used it, so I figured it must lead somewhere. It was a dirt track with rough fields on either side, where jagged tree stumps and smouldering piles of wood were interspersed with recently planted cassava stems.

I started walking up the track and ended up following it for several days.

Later that afternoon, and in the afternoons that followed, when I came across a village at a time that seemed like a sensible hour to stop, I asked for the Village Head. After a short negotiation to agree on a price, the Village Head took me to one of the villages houses where I stayed the night.

The houses were simple 1-2 roomed dwellings with iron roofs, walls and floors made from rough-hewn planks, with the only modern amenity being light from a single Butterfly lantern hung in the centre of the main room. Food was cooked on wood-fired stoves in a separate building, where the women worked while the men talked.

The evening meal consisted of rice and vegetables with a little meat. On my first night, a single tin of curried chicken was opened and placed beside a bowl of rice in front of me. It was such a small tin, and there were so many people in the room, it was almost impossible to take only my fair share.

Evenings involved sitting on the porch with the family exchanging more smiles than words, except with the old people, who assumed I understood everything they said and proceeded with long one-sided conversations.

One Village Head seemed particularly pleased to meet me. If the whole experience had not seemed so otherworldly, his roguish grin and humour-filled eyes would have been sufficient warning that he was up to something.

We sat on a mat together in stilted conversation while his wife served us cups of tea and sickly-sweet cakes.

Not long after my new friend established I was Christian—if I could communicate it I would say ‘raised a Christian’ and let people assume what they would—another man joined us on the mat with a young woman I assumed to be his daughter.

I sat and nodded and smiled not understanding 99% of what was being said, and certainly not understanding anything about what was happening. It was not until the third father and daughter, in a procession of fathers and daughters, that I began to suspect that these young women were being presented to me as prospective brides.

I could pick up the odd word in the sentences of the men; their daughters did not say a word. My suspicions were further raised when a sentence directed at me, with accompanying gestures directed at the young woman, had a word I recognised.

The word I recognised was, ‘love’.

With patched-together phases from my dog-eared phrasebook, I confirm my worst suspicions that I was indeed an eligible bachelor.

I must have seemed uncomfortable, yet the men could hardly contain their pleasure at the proceedings. The young women seemed less pleased by the goings-on as they flushed red with either embarrassment or anger.

The last of the young woman to sit on the mat—I shut the occasion down by lying about my marital status—was the only one to look at me and she studied me intently. When we made eye contact, she did not seem entirely repulsed. I wondered if she was sizing me up as an option to escape from a place where women were offered up to strangers. But then, that was possibly not what was happening at all, and I may have completely misinterpreted the entire situation.

It would not be the last time.

In every village I visited along that track I was asked my religion.

Muslim villages were no less friendly, but in them I did not seem to be considered an eligible bachelor.

(The Muslim villagers were part of a grand scheme called Transmigration designed to ease the population pressure in far-off Java. Transported to remote often marginal frontier places, families were given land and supplies and left to eke out a living as best they could. The Christian villagers were rural poor from Sulawesi pushing into the forest in search of a better life. I planned to return to the area to work with a local conservation group, but the project was scrapped due to an outbreak of communal violence: the Christian and Muslim villages had subjected each other to the most horrific attacks. At the time I was first there, I would not have believed something so gruesome was possible. By the time I heard the stories, I had spent several years in Papua New Guinean. I had seen there the incredible potential for violence between neighbouring villages of different cultures that, to an ignorant outsider, appeared very similar, but in their reality share little in common other than deep-rooted mistrust and animosity)

While I sat and drank sweet tea in the mornings before heading back out on the track, I would watch the men of the village heading out into the forest with chainsaws and air rifles. Under the Suharto dictatorship at the time, it was illegal to own firearms, so Indonesians made ingenious homemade air rifles; not the slug guns and bb guns of my childhood, but weapons capable of bringing down large birds, monkeys, and even small game.

I saw birds and lots of butterflies, and occasionally I heard a group of monkeys in the distance, but my walk was not the wildlife experience you might expect when so close to tropical rainforest.

The track I followed mostly skirted the edge of the forest, and walking along it was the first time I encountered tropical rainforest rapidly retreating to the sound of chainsaws and the smell of burning wood.  These were sensations I would experience repeatedly in the years that followed, and ones I have spent the last 30 years trying to stop, at least at the industrial scale.

The track eventually landed me back on another road—or it might have been the same one I had left several days earlier—where I hailed a passing bus, that took this smiling idiot, further along the road… 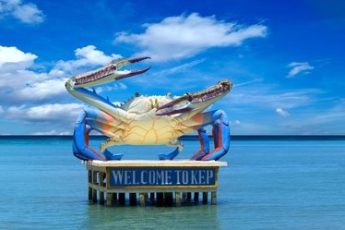 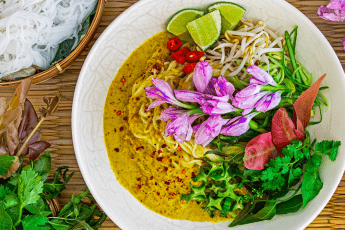 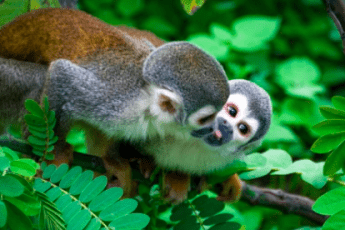