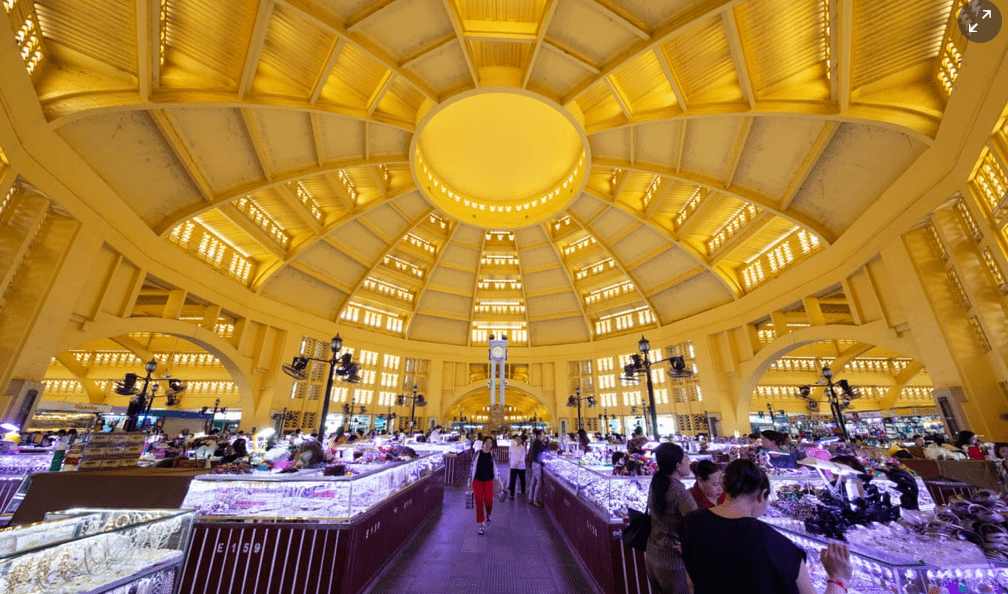 Oliver Wainwright, The Guardian, shares his lockdown fantasy: “I wish I was back in the bustling, mind-blowing beauty of Phnom Penh”

Hovering like a banana-coloured flying saucer above the dusty, congested streets of scooters and cyclo taxis, the central market of Phnom is a remarkable thing. Its enormous concrete dome rises in sharply serrated steps, perforated with screens of chevron tiles, above four long streamlined arms that stretch out like the wings of a benevolent mothership, sheltering the chaotic labyrinth of market stalls below. Built in the 1930s, as a futuristic fusion of French art deco and Khmer temple motifs, it featured the second largest concrete dome in the world at the time (trumped only by the Pantheon in Rome), a fitting symbol of the Cambodian capital’s status as the “Pearl of Asia”.

I didn’t have high hopes for Phnom Penh when I arrived there on a backpacking trip in 2003, after a few days exploring the jungle temple complex of Angkor Wat and the floating villages of Tonle Sap  I had been warned to get out of the Cambodian capital as quickly as possible and head for the coast. Almost entirely emptied of its population by the genocidal Khmer Rouge regime in the 1970s, the city was now bouncing back as an unplanned jumble, with French colonial buildings left to rot as new development expanded outwards in an unbridled sprawl.

Yet Phnom Penh had a magnetic charm in its frenzied muddle, with dense streets of Chinese shophouses jostling for position with crumbling French mansions and heroic 1960s experiments in the New Khmer architecture of post-independence Cambodia. After interminable weeks of lockdown, it is exactly the kind of frenetic urban melee I’m longing for, to be lost in the bustle of crowds and wander for hours with no purpose other than to discover what lies around the next corner.

Exploring a new city is a luxury most of us won’t have for a while, but in the meantime you can indulge your wanderlust with an architectural guidebook from Berlin-based publishers Dom. Since 2005, the architect-run firm has been producing illuminating titles on some of the world’s lesser-trodden architectural hotspots, from Astana to Pyongyang, Wrocław to Yerevan – and even the moon. Phnom Penh is a timely addition, a place whose architectural wonders from all eras have been increasingly under threat from a tidal wave of foreign investment, with no standardised building code nor binding zoning rules in place to guide the influx.

The origin myth of Phnom Penh describes how a wealthy widow, named Grandmother Penh, found four bronze Buddha statues in a hollow tree in the river by her house, and erected a small shrine on an artificial hill (“phnom” in Khmer) to protect them. Wat Phnom still stands there, progressively enlarged and gilded over the centuries by generations of kings, its hill raised by tonnes of soil excavated from where the central market now stands.

The temple’s white conical stupa rises above a cityscape that is mostly the result of French beaux-arts planning, its network of broad boulevards and public parks laid out from the 1870s onwards when Cambodia became a French protectorate. Under Parisian control until 1953, the city developed into a supremely elegant place, its tree-lined streets flanked by creamy stucco piles and ornate neo-Khmer fantasies such as the Royal Palace and the National Museum, along with art deco wonders including the central market.

But the period that is enjoying renewed interest, overlooked until recently and still under threat, is the daring post-independence work of the 60s. It was an optimistic time of modernisation and bold infrastructure projects under Norodom Sihanouk, the eccentric king who became the first prime minster of the independent state. Proclaiming a new era of “royal Buddhist socialism” (which had very little to do with socialism and a lot to do with monarchic nationalism) Sihanouk embarked on an ambitious programme of public works, building schools, factories, sports facilities and cultural centres along with a deep sea port and expanded airport. Chief form-giver to much of this was Vann Molyvann, a young architect who had studied in Paris and brought a fresh new approach, combining international modernist principles with a deep appreciation of Khmer culture and an understanding of the local climate.

“We could not simply repeat things as they were once done in Europe,” said Vann, in an interview later in life. “We had to think of new ideas, with a Cambodian perspective.” It was an uphill struggle. “When I first came back to Cambodia,” he recalled, “no one knew what an architect was.”

He soon showed them. His first building was the expressive Chaktomuk conference hall, which still stands on the banks of the river like the leaf of a gigantic fan palm. Its zig-zag roof expands outwards in a broad arc, enclosing the fan-shaped hall and presenting the street with a curved frontage like an ornamental tiara. Next came the National Sports Complex(proudly known as the Olympic Stadium, despite Cambodia having never hosted the Olympic Games), a sublime essay in concrete construction, with four cantilevered waffle-slab roofs each supported by a single column – a feat managed with the help of Le Corbusier’s engineer, Vladimir Bodiansky. A structure as archaic as it is monumental, it has allusions to the temples of Angkor with its axial layout and quadripartite divisions, as well as clever passive environmental techniques, using moats to encourage ventilation and cooling, way ahead of its time.

Vann deployed similar principles at the Royal University campus, where his former teacher training college stands as a masterpiece of the New Khmer spirit. A roof of honeycomb tubes hangs above an open loggia where windows are set back behind deep concrete shading fins; brick panels appear to float above a bridge flanked by naga (the divine half-serpent creatures of Hindu mythology), leading to elevated causeways that snake their way around the lush green campus above a series of cooling ponds.

Tapering concrete columns ring a circular library, modelled on a typical Cambodian farmer’s straw hat, while a series of lecture halls are lined up along the side of a bridge pathway like chubby animals at a drinking trough. While the city’s new shopping malls are often chilled to arctic temperatures by energy-guzzling air conditioning, the rooms of the college are pleasantly cool without any mechanical systems, thanks to Vann’s climate-sensitive designs. “Cambodia is a society of half-earth, half-water,” the architect said. “Cities should not be built by landfill but by incorporating water into their design.”

Sadly these are principles that seem to have been all but abandoned. In 2000, a Taiwanese investment company signed a contract to renovate the stadium in exchange for building on the land around it; the company proceeded to fill up the moats with offices and shops, destroying the hydraulic cooling system in the process. The surrounding land has since been sold for development, leading to a rash of high-rise blocks that now fringe the grounds.

As the guidebook’s authors lament, the last decade has seen unprecedented growth, with destructive consequences. Following recovery from the 2008 financial crisis, Phnom Penh has become a real-estate hotspot for Chinese and South Korean investors looking to buy property without the tedious regulations or instability affecting most neighbouring countries in the region. Gated communities, or “borey”, have spread like a fungus, occupying huge plots of land without any connecting streets, creating a landscape of fenced-off islands and increasing congestion.

Mirrored glass shafts have sprouted a stone’s throw from Wat Phnom, including Terry Farrell’s grotesquely clumsy Vattanac Capital tower, apparently designed to look like the arched back of a dragon, “poised to leap into a new era of prosperity”. With a high-end shopping mall aimed at the country’s ultra-rich elite of business tycoons and MPs, known as “excellencies”, it is an empty symbol of a place still mired in kleptocracy.

Local architect Pen Sereypagna, director of the Vann Molyvann Project, an initiative to document Vann’s surviving works, is frank: “The development [of Phnom Penh] is based more on private interests than on the interests of the common good,” he says, in an interview in Dom’s guidebook. “There is a lack of public infrastructure and poor communities are being driven out of the city in the name of beautification.”

Documenting more than 140 buildings in detail, often for the first time – from precious religious sites to everyday apartment complexes – this new book not only provides a comprehensive guide, but makes a powerful argument to preserve the richly layered urban fabric, much of which now stands in the line of fire.

You can read the original article, including pictures, by clicking Josh Wainwright