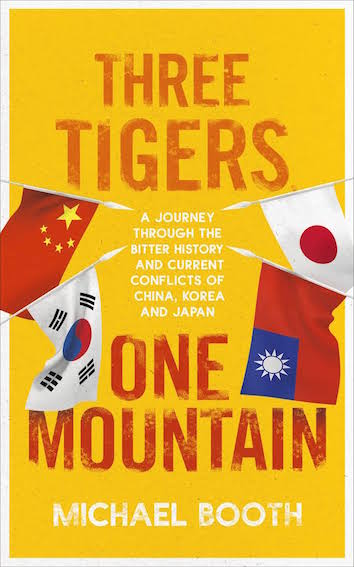 Three Tigers, One Mountain
A Journey Through the Bitter History and Current Conflicts of China, Korea and Japan.

Few can be unaware that, on occasion, China, Japan, Korea and Taiwan do not get along (actually the Taiwanese quite like the Japanese), a situation rooted in a history that Michael Booth sets out to explore in his new book, Three Tigers, One Mountain (the title is inspired by an ancient Chinese proverb: ‘Two tigers can not share the same mountain’).

Taking us on a journey that starts in Japan, before traveling on to South Korea (the north remains locked off to his scholarly pen), China and Taiwan (he lumps the two countries together, thus the ‘three’ in the book’s title; not sure what my Taiwanese friends would think of that), before ending where he begun, in Japan, Booth explores the origins of the mutual animosity that has checkered the relations between these four countries. On route he interviews numerous individuals connected to this curious state of affairs – museum curators, campaigners, academics, activists, anthropologists, politicians and ambassadors, as well as war veterans and those tortured and oppressed during the tensions and conflicts that have punctuated the recent history of the region.

A confession: when this book first fell into my lap I thought it might be a dry affair – an academic tome that would cure me of my seasonal insomnia. My concerns evaporated when, looking at the cover, I saw that Michael Booth was the author—I had happily enjoyed one of his previous books, a gastronomical journey through Japan (Sushi & Beyond). Our relationship sealed I felt assured that Three Tigers would not be a boring affair. But then a new concern set in, would an author who had been unable to avoid the clichéd wonderment at Japanese toilets be up to the task of exploring the much harder realities of war, rape, torture and oppression that Three Tigers would need to cover?

Ultimately it will be up to you, the reader, to decide how successful Booth was in this task. For my part I think he does an commendable job in exploring some of the key points underlying the tricky relations between the four nations, with his engaging prose making the topics more approachable and interesting than they might have otherwise been (although, seemingly unable to avoid the subject, he does note that the Taiwanese have the same partiality to high-tech toilets as the Japanese).

Along the way Booth does what he is particularly skilled at, unearthing unique stories that you have likely never heard. One particular tale, which underlies the periodically vicious nature of affairs between the four nations, arose during the Imjin War of the late 1500s, when Japan sought to invade and occupy Korea. During this conflict, Booth writes, the Japanese generals, finding severed heads too bulky to send back to Japan, sent jars of pickled noses instead. These jars, he reports, were interned beneath earth mounds, one of which he visits during his Japanese sojourn.

As one would expect more familiar stories are covered: Korean comfort women (there were Chinese as well), protests ignited by the treatment of history in school text books, the rape of Nanking (Nanjing), the Taiwanese ‘White Terror’, along with another ‘fact’ that I did not know, namely, to paraphrase Booth: ‘the Taiwanese really do not like the Koreans’ (I asked several Taiwanese acquaintances if this was true and they simply laughed, meaning either the author is incorrect or he has exposed an embarrassing truth).

So who or what is to blame for all this bad blood?

At the outset Booth opines that it is the Americans, the bitterness arising from forces unleashed through the plying open of Japan by the ‘black ships’ of Commodore Perry (1853). Later, midway through Three Tigers, appreciating that the tensions have deeper historic origins, he suggests Confucian principles might be responsible for some of the blame. Finally, towards the book’s end, contemplating the evening skyline of Hong Kong, Booth reasons that, perhaps, a share of culpability lies with his own countrymen, the British (the Opium Wars etc.).

In the end however, as the author reasons, it is likely that a combination of these factors, alongside more recent political and strategic ambitions, that keep tempers simmering. Yet Booth is likely correct to note that for most, across the four countries, the tasks of day-to-day life take precedence; with differences over past injustices remaining dormant, but susceptible, to the occasional spark of national indignation and provocative righteousness.

I did get one further ‘take home’ from Three Tigers: if I am ever obliged to leave the fair borders of the kingdom then Taiwan reads like a damn nice place to live.