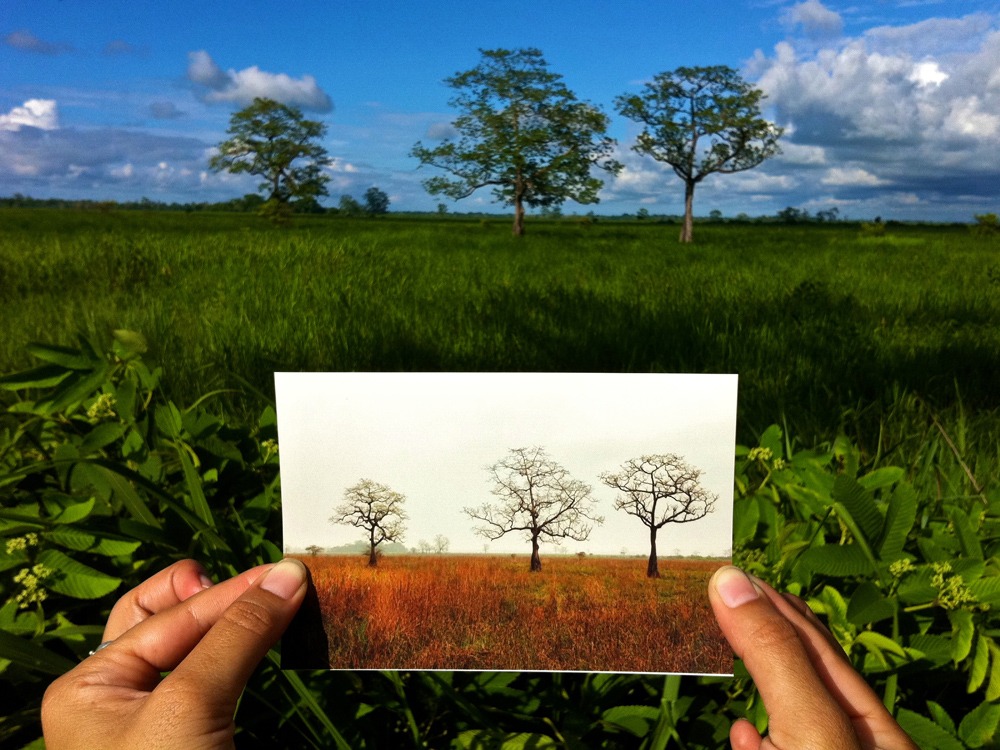 November 24, 2021 by Contributor No Comments

There we were, dry as dust, baking in April, the hottest month of Cambodia’s dry season. Those with the time and money drank. Drank for relief from soul-exhausting heat, drank from desperation, against darkness, depression, or disappeared dreams.

In the distance, low-slung stratus clouds slowly turned salmon pink from the sinking sun. Azure sky slabs above the streaky pink provided an exquisite color contrast. I stretched out beside a roof-top swimming pool to watch the shifting light show.

For days, clouds scudded across the sky serving as scenery rather than leaking swimming pools that fly. In a land where “to eat,” yam bai, literally means “to eat rice,” ¹ and about two-thirds of the population are farmers, ² a “dry” wet season means disaster.

Noticing my interest in the sky, Champei, the barmaid, said, “We need some pee from paradise.” Expectations aren’t always met. If you don’t believe me, ask a cloud.

While essential to life, storms also bring death and disaster. In the first half of this year, 2021, “natural disasters, rainstorms and thunderstorms killed or injured nearly 200 people and damaged thousands of homes.” ³ Being outside at the wrong time can be fatal.

In the Diamond Sutra, life is described as: “A flash of lightning in a summer cloud.” ⁴ Conversely, being cooked in the interminable heat turned time into torture: a baking eternity.

Rain would bring relief. After a fire-bolt flash, start counting. Thunder booming on five shows the storm is a mile (1.6km) away. ⁵ This time there weren’t any booms: it was a storm without a soundtrack. Sound disappears over distance. Light arrived, but sound didn’t make it.

Some Buddhists believe our senses trick us into “cloud dreams”: a world of illusion. ⁶ Splitting sound from lightning confused the senses: like separating heat from fire. Watchers felt cheated: they were only getting half the show.

But even getting the thunder isn’t enough. As the Khmer proverb puts it: “When you hear the thunder, don’t hurry to throw away the old water.” ⁷ Don’t trust your senses or the sky. Sound doesn’t always trigger rain, bringing relief to the parched earth.

Those hot April days featured lots of trailers before the “main event.” If everything works well, the desultory first rains will come after the Khmer New Year, which is around the middle of the month.

Cambodian monsoons have Indian connections, starting with the April rains, called “mango showers.” Both countries consider mangoes as iconic, the symbol of the season. Both consider May to be the normal monsoon beginning. Rainfall is expected until October in Cambodia, in India it ends a month earlier.

‘The Indian Ocean has been described as “only half an ocean”; it is not half the size of the Pacific; and the great mass of it is wholly within the tropics and flanked by tropical plateau. It is, therefore, both the most enclosed and warmest ocean in the world, under a double land influence. These are conditions which would always favour the conversion of permanent planetary phenomena into periodic regional phenomena.’ ⁸ In other words, the Indian Ocean is a monsoon machine. Winds make monsoons. When cool moisture-laden sea air fills space left by rising hot land air, rain is the result. ⁹

Separating southern Cambodia from the Indian Ocean is the narrow Thai peninsular, only 25–30 miles (40–48 km) wide at its narrowest point, ¹⁰ from there winds enter the Gulf of Thailand before rushing into the Cambodian landmass. Thus, Cambodia’s most powerful monsoon is known as the Southwest Monsoon.

According to a five-year Japanese study from 2010-2015, between 50 to 78% of Cambodia’s rain falls during the monsoon season. ¹² Another major Cambodian water source is the swollen Mekong, one of Tibet’s ten major rivers pouring out of “Asia’s water tower.” ¹³ The Mekong snakes across the nation, entering from Laos and leaving through Vietnam.

But Cambodia’s ‘liquid lung’ is Tonle Sap, the largest lake in Southeast Asia. Monsoonal influenced expansions and contractions of this monster ‘aquatic lung,’ along with its immense fish riches may have enabled the rise and fall of earlier civilizations, centuries before Angkor. “It is entirely possible that more than 1600 years ago, farmers in Angkor Borei developed a farming system, dry-season flood-recession rice, that became the basis of future civilizations in the lower Mekong basin, including Angkor and the Tonle Sap.” ¹⁴ French researchers Groslier and Dumarcay described Angkor Wat as a ‘hydraulic city’ because of the complicated construction and engineering methods employed to move water in and around it. Cultural aspects also played a crucial role in the role of water, so they should be considered.

“Clearly deep within religious practice of the Khmer is reverence of water as a special benefit bestowed on humans by the gods, as riverbed fertility symbols indicate. Water from this river source, thus blessed with passage over fertility symbols, increased the potential for a bountiful growing season.” ¹⁵

Snakes mimic the sinuous flow of water: it is not accidental that the nāga, a multi-headed cobra, is ubiquitous in Cambodia. Nāga can be seen on staircase railings leading to the temple sanctuary (vihar), symbolizing the bridge between earth and heaven. Nāga symbolize rain, so they can be considered a conduit between heaven and earth. ¹⁶

Frozen in combat on an Angkor Wat frieze; figures fight a tug of war. With a giant nāga as their rope, groups of gods and demons churn the Ocean of Milk for the ambrosia of immortality. Churned foam also produced apsaras, heavenly spirits, or divine dancers. ¹⁶

If Angkor Wat is a stone symphony, a carved cosmos, apsaras are moving sculptures; their sinuous movements prayers for fertility and rain. They came to be considered the core of Khmer culture. ¹⁷

“…Kambu Sayambhuva, an Indian prince, married to Mer, an apsara, from whom the first Khmer kings descended, making the mother of all Khmers a celestial dancer. This legend appears in inscriptions dating from 947 AD.” ¹⁸

Despite depredations, like deforestation and upstream damming, and despite some desperate years, the water keeps coming and Cambodian life continues. More needs to be done. Efficient fish pass systems to get through dams, as well as equitable water distribution, are essential for the more than 65 million people living in the Mekong River basin.

“It is clearly crucial to consider the geographies of the social and environmental impacts of dam development in the Mekong River Basin and to seriously evaluate the winners and losers of such projects, including beyond national borders, as those who are losing out have much less influence and wealth than those who are benefiting from hydropower dam development.” ¹⁹

Because trees act as ‘ground clouds,’ because they also serve as reservoirs, reforestation is another form of water insurance. For example, a reforestation project on Cambodia’s Kulen mountain “brought the rain back.” ²⁰

With its more than 300 fish species, Tonle Sap supplies “about three-quarters of the nation’s protein intake.” ²¹ Such profuseness is not limited to the lake. Consider the ceaseless sound curtain created by cicadas when they occupy trees for a few days after the rain comes.  Last year Siem Reap had a grasshopper plague. They leaped into restaurants, unwittingly suiciding into customers’ drinks. Frogs gorge on mosquitos. Squadrons of dragonflies patrol the air after a downpour. Beetles drop from trees; geckos fall from suddenly opened doors.

However, the animal that inspired this essay is a fish, known as a ksan, sometimes it is stranded when the waters of the Tonle Sap recede. It waits out the dry season inside a pool in a round plant attached to a tree. ²² When the floodwaters return it can free itself. Many of us are waiting like the ksan for our little pool to be enlarged so that travel restrictions are lifted, freedom of movement is restored and life returns to something approximating what we had before we were “trapped.”  Whatever happens, change will continue. The word cloud derives from the word stone, and worm used to mean dragon. It should not be a surprise that the words, “astonish, astound, and stun all contain the idea of ‘thunder-striking,’ deriving from the Latin extonare meaning “to thunder out.” ²³ (1451 words, incl. title).