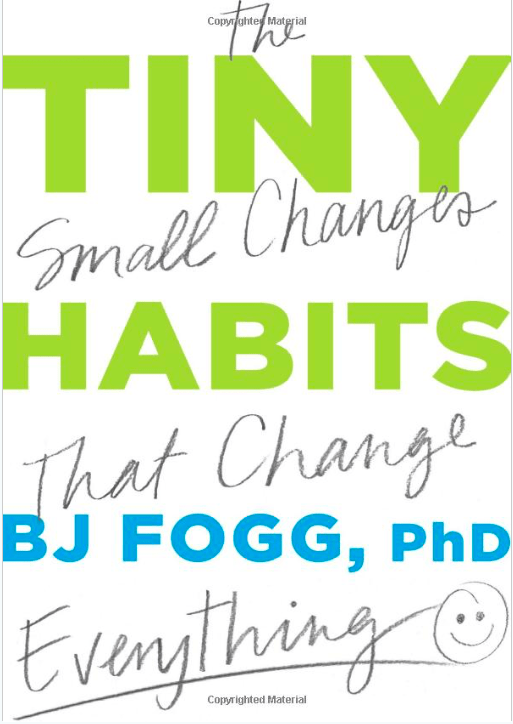 With self-help books, I can take or leave them, and usually I leave them.

But in this case,  I took up the challenge to review, Tiny Habits : The Small Changes that Change Everything,  by BJ Fogg PhD,  Founder of the Behavior Design Lab  at Stanford.

In my book, authors who display academic qualifications on their book covers are putzes, so it’s a challenge to take Fogg seriously.

And what an extra challenge it is, to read this, his book.

Basically the author recommends not overreaching, but to set about completing projects or to change habits or to adapt to new habits in tiny steps, by creating tiny habits.

Much like the Cambodian  saying, of “moi moi moi”, one one one, one step at a time.

Actually, the notion of one small step at a time is a good idea, and I’ve already incorporated it in my life.

For example, I was struggling to write my last book. My desk faced a window that looked out onto a building site and what started out as a procrastinative  distraction became an inspiration.  While watching  workmen building a house, one brick at a time, I  plunged into writing my book  one word at a time, one sentence at a time,  and,  et voila, in time it was finished – about the same time as the building of the house was complete.

It’s a system that works, and I was wondering how Dr. Fogg PhD would lay it all out. And he lays it out with a heavy trowel. His is a big thick book, in keeping with say a manual for the operation and maintenance of booster rockets for the next Mars mission, replete with graphs, clip art, disturbing jargon, oodles of  diagrams and more models than Covid-19.

While there’s a lot not to like about the book, it’s so comprehensive that, conversely, there’s also a lot to like about it.
The essence of Fogg’s philosophy is  to set a goal and then “Pick a small step toward your goal—a step so tiny, you’ll think it’s ridiculous.”

In a dinky diagram  headed “Habit to make Tiny”  he lists “Clean the kitchen after every meal,” and as a “Starter Step”  he lists, “Open the dishwasher,” which totally lost me because:

a) I think that’s a really ridiculous starter step

b) I don’t bloody well own a dishwasher.

But Fogg’s an American and will presume that every one globally has a dishwasher, so fair enough.

This is a book to dip in and out of, and at times you can have fun with it,  at times it can be exceedingly beneficial, and at times it packs such beaut stuff as contained in the “Tiny Exercises to Practice Stopping and Swapping” section.

Under a subhead of  “Practice Creating a Swarm of Behaviors for Stopping a Bad Habit”,  Fogg lists “Step 1:Pretend you are someone else who has a bad habit.”

This is followed by “Step 2: Draw the Swarm of Behaviors graphic or download the template from TinyHabits.com/resources.”

I riffled back and forth through the book hunting for  the aforesaid graphic and couldn’t find it, and although I suppose I could have  gone online for the template, I got distracted ( a bad  habit of mine)  by a listing of handy hints under the heading of “Tiny Habits for Stopping Habits.”

Listing Number 8 reads, “After I get undressed, I will say aloud ‘Ohio.’ Only handle it once – aka put it away.”

I very much worry about the meaning of listing Number 8, but worry is another a bad habit of mine – as is being somewhat of a w**ker at times – and I’m taking tiny steps to overcome both conditions.

Tiny step 1. is to close this book.