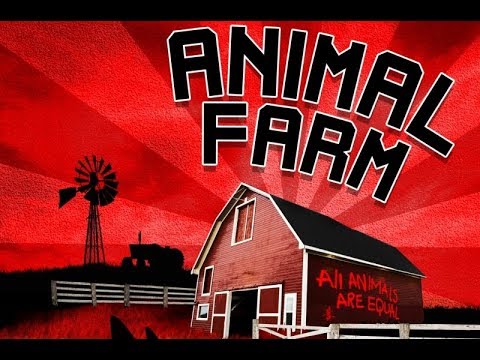 It’s been 75 years since the comrades of the once (and future) Manor Farm first took up the anthem “Beasts of England” and surprised themselves by routing out the tyrant farmer, Mr. Jones, from his holdings. Seventy-five years since the seemingly inalterable tenets of Animalism were scrawled in white paint on the side of the barn, and the enthusiastic dreamer Snowball strove for his short-lived utopia before running afoul of the Berkshire boar Napoleon’s autocratic ambitions.

In the decades since the publication of George Orwell’s seminal work of anti-Stalinist satire, we have seen the collapse of the regime that disturbed and inspired its author; the beginning and end of the Cold War, with all its attendant horrors; and the rise and fall of any number of would-be Napoleons, both at home and abroad. Animal Farm, once a work so controversial that it seemed unlikely to find a publisher, has served for so long, and in so many school curriculums, as the predominant introduction to the concept of totalitarianism that it is in danger of being perceived as trite.

With Animal Farm, Orwell—then a 42-year-old democratic socialist known primarily for essays and journalism exploring social injustice and class iniquities across Europe—hoped only to dissuade his countrymen from what he recognized as a dangerous infatuation with Joseph Stalin. It is indisputable that an author’s intentions for his or her work usually don’t survive publication, let alone the author’s death. Nothing of Animal Farm’s success during Orwell’s lifetime could really augur the varied purposes it would come to serve, or the global behemoth it would quickly become. Pushing back on a critique that Orwell was too light-handed in his reproach of totalitarianism, Julian Symons wrote, “In a hundred years’ time perhaps, Animal Farm may be simply a fairy story, today it is a political satire with a good deal of point.”

That was then, and this is now. Luckily, having spent the last seven and a half decades heeding its warnings and taking its lessons to heart, we have pulled ahead of the dangers Animal Farm hinted we might one day face. As a species, we have defied Orwell’s wildest expectations. Wouldn’t he be thrilled to know that we no longer have need of a text that so explicitly decries authoritarianism, fearmongering, tribalism, historical erasure, factual manipulation and war as an engine of national pride?

Reader, I jest. All evidence points to the fact that we’re in a great deal of very familiar trouble the whole world over. That we so dependably manage to be, despite the existence of prophetic works like Animal Farm, should worry us to the point of despair. But this is the way of our species: memory fades. We grow bored with the lessons of the past. We tell ourselves: things could never get as bad as they once were because, unlike those who came before us, we are good people who know better than to let it happen again.

I was raised in the former Yugoslavia in the mid-1980s, in a household and culture gripped by the distinction between “indoor” and “outdoor” talk. Understanding this was as essential to my early upbringing as table manners or the correct protocol for crossing the street. The gist was: certain conversations were appropriate for public consumption, while others belonged only within the confines of the house. You were expected to use your common sense to distinguish between the two as you grew older, but your starting point was to assume that anything overheard at the dinner table qualified as indoor talk and was not to be discussed with people outside the home; that is, outdoors. You think I’m talking about politics here, reader, but I’m not. Politics was so out of bounds that I can’t remember any adult ever declaring support for any candidate in my presence until we moved to America. I’m talking about simple details of daily existence: a new pencil case that might be misconstrued as a sign of increased wealth, or a sandwich that might give a nosy stranger on a train some false idea about the demographic composition of our family because one of its ingredients may or may not be a certain kind of ham.

People incapable of recognizing the distinction between indoor and outdoor talk—people who might volunteer, a little too eagerly, the outcome of some private development, or some holiday plan, or, the worst of all sins, the affairs of some mutual acquaintance—were to be regarded with disdain and suspicion. For if they didn’t value the sanctity of their own indoor talk, imagine the damage they could inflict if they somehow got ahold of yours!

I have been living in America for 23 years and still have a hair trigger where indoor talk is concerned. This will be with me forever, I suspect, probably hardwired in some remote twist of trauma-blitzed DNA inherent in people worn down by centuries of imperialism and political volatility. Perhaps that’s why, when I did eventually read Animal Farm—sometime in 1997, no doubt, in a suburb of Atlanta where my mother and I eventually wound up after spending most of the Yugoslav Wars in Cyprus and Egypt—the character with whom I felt the most kinship was Benjamin the Donkey. I was heartbroken by the heavily foreshadowed death of Boxer the horse, who seemed to stand for so much of what was good and true; but all I really cared about was whether his little donkey friend would successfully dodge a similar fate.

Benjamin is Boxer’s closest companion. A cynic of uncertain age, he is known for having outlived all his peers by keeping steadfastly silent. Animal Farmscholars have often cast him as the allegorical stand-in for Russia’s disillusioned older generation, as wary of the Revolution as they were of the tsarist society it dismantled. And indeed, in his keep-it-close-to-the-vest reticence, I recognized many of my grandparents’ tendencies: an obsession with common sense; a potent distrust of propaganda; a tendency to eye roll at naïveté; and above all, a really keen sense of the difference between indoor and outdoor talk.

Benjamin is a survivor. But his carefully maintained silence comes crashing down when his dear friend, Boxer, is carted off to Willingdon after succumbing to labor and age. Though Squealer persuades the other animals that Boxer is, of course, bound only for the animal hospital to receive care, Benjamin finally breaks with precedent to tell them the terrible truth he has always been literate enough to know: the van taking Boxer away bears the insignia of the dreaded knacker, and Boxer is going to his doom. With the death of what is arguably the book’s most beloved character, Orwell shows us the futility of Benjamin’s revelation. It is too late for fraternal duty to override self-preservation.

The notion that Western countries are clever and strong enough to both recognize and resist the grip of totalitarianism is a dangerous myth. A fairy story, if you will—one to which we are ironically susceptible, because being shaped by Animal Farm deludes us into thinking we are sufficiently armed. “We already know what we need to know,” we might say. “We all know that individuality is a form of resistance, and that anyone who hungrily pursues power is probably unworthy of attaining it.”

Here’s some formerly indoor talk: too many of us take our freedoms for granted. Even now, those of us who never grew up fearing the dangers of indoor talk are far too cozy in the belief that we are safe from the forces that could plunge us back into a world that demands it. Animal Farm asks us to work against that delusion. We are making great strides in this direction already. In opening up about the persistent, daily injustices that shape life—micro- and macroaggressions, racial profiling, police brutality, exploitation of body and mind, intolerance, erasure, assault, exclusion—even the most disenfranchised among us have found themselves wielding, if even for a moment, sudden and unprecedented power to enact change that once took a lifetime. At our best, we are able to stand with and for one another like never before. We celebrate one another’s rights to individuality, expression, faith and love.

We have a quarter century to test Julian Symons’ hopeful prediction, and usher Animal Farm into the niche of fairy stories. I am not sure even that is time enough. It’s entirely possible that we will never live in a world free of Napoleons and the Squealers who prop them up; that we will always find ourselves peering through windows, unable to tell the difference between the people who claim to be serving our interests and the enemies to whom they have betrayed us. But it’s also possible that we will never be isolated enough to keep signs of danger to ourselves as we once did; that we will openly decry every change to our commandments and insist on reiterating the history we know to be true, however terrible its contents. It is possible that we will recognize, without the blinders of Squealer’s “proper perspective,” that danger to one is danger to all; that we will read the knacker’s signage aloud, for all to hear, before it’s too late.