November 11, 2021 by Contributor No Comments

The town was covered in reddish dust. A nickel mine operated near-by and everyone worked there. Thanks to the rain, the dust clung to everything. Sam and I had been travelling south from the Palawan capital Puerto Princesa for several days, on a series of Jeepneys, the Philippines’ all-purpose pubic transport vehicles. Sometimes we got seats and ate driving rain through the open slats of the passenger section. When the sun was out, we clung to the roof, along with bound chicken and pigs and ate dust. At a stop half-way down the island, a piglet in a rough rice sack made a valiant break for freedom and hurled itself along the hot tarmac down the road we’d just traveled, panicking, leaving a trail of shit and laughter from its owners behind. They caught the poor creature soon enough. There was no escape. There was no freedom. Not for pigs anyway.

We’d been sitting in front of the town’s all-purpose kiosk for three days. Every now and then I bought a smoke, stood under the kiosk’s awning to make sure it wouldn’t soak and inhaled furiously. The cigarettes were called Hope. A piece of rope smoldered by the kiosk’s counter all day. That’s where I got a light. And a dirty look from the old crone who ran the place. Behind the kiosk, the town stretched away into red mud. A couple of disintegrating wooden warehouses populated by armies of rats sold the basics – rice, noodles, alcohol, and bullets leant into the daily deluge. Beyond these exhausted malls, a couple of hundred shacks and a handful of ugly concrete buildings made up the rest of the town. We slept in one of the concrete buildings which rented four rooms, mostly by the hour, above a karaoke bar. The nickel mine lay beyond a barbwire gate just outside of town, guarded by men wearing Carrera sunglasses and carrying pump action shotguns.

No one was happy here, and no one was ever going to leave. Except for us. That’s why we were so popular.

Once in a while I ambled down to what passed for the jetty, a long line of loose planks stretching across the placid water of the small bay that the town lay in. Vultures perched on the rotting posts that held the jetty together, plumage dripping. A couple of catamarans, their wings skeletal and fragile on the dark green water, lay tied to the posts. There was no one on board. Beyond, black clouds rumbled silently across the angry gun metal sky. The coconut trees on a couple of small isles a mile or so out to sea bent in the rain, threatening to fly off into the churning sea beyond.

The boat to Balabac, the one we wanted to be on, should have left a couple of days earlier, but the rain had been too strong. There was a storm out there lashing the ocean like a devil. This is what Mr. Gabunilas was telling me. Mr. Gabunilas lived on Balabac, the the Philippines’ most remote, most southern island, a nest of outlaws allegedly, that young, entitled adventurers with too much time on their hands needed to visit. He was about sixty, a skinny man with fading Christian tattoos on his arms, a legacy of his years fighting with the Americans against the Japanese in WWII. Mr. Gabunilas was partial to a bit of hope himself, and so we periodically stood next to each other under the kiosk’s awning, smoking, while he would give me an update on the lack of updates.

It was that time of day and I strolled from our room to the kiosk through light drizzle and purchased the day’s first increment of Hope. The old woman scowled when I pulled the rope to my smoke. Mr. Gabunilas was next to me before I could take a drag. I nodded to the woman for another Hope, but he waved me off, his eyes on fire.

“Sure, happy to leave, we’ve enjoyed all the sights in town.”

Mr. Gabunilas grabbed the cigarette off the old crone, lit up and left, waving at me emphatically. I hadn’t seen anyone here with this much energy.

“Today, we go. The boat will go. We will leave,” he shouted and disappeared behind the malls.

An hour later, the boat captain and his crew showed up. They wore grim expressions as they passed us and began to load one of the catamarans with petrol, ice boxes and plastic sacks of instant noodles. A small crowd gathered by the jetty, half hidden under garish umbrellas. The vultures were nervous, their pink necks quivering like something that was about to die. The sky looked the same as it had for days, wet and angry.

Mr. Gabunilas arrived, a tattered rucksack slung across a shoulder, eyes alight as if he’d experienced a religious epiphany. He guided us down the rickety jetty with a great show deference and even helped load our bags onto the boat. The small crowd, who turned out to be, like Mr. Gabunilas, from Balabac, followed us with visible trepidation. Fifteen minutes later, we set off towards a darkening sky, southwards, the catamaran almost loaded to capacity.

We skirted the bay and headed off the Palawan coast into the South China Sea. The town and with it, its torpor, quickly faded into the moist afternoon gloom. Soon the waves rose and there was nothing but water around us. A couple of sea gulls that accompanied us turned and headed back the way we’d come. The boat’s engine roared. We harked on across ever larger troughs, ravines and summits of water. The night came quickly and we sat in almost complete darkness, under a single bulb fastened to a leaky stretch of tarpaulin above our heads. It rained hard enough to knock out flying fish. Black water rushed at us from all directions. The catamaran heaved. It creaked. The passengers began to pray.

I turned to Mr. Gabunilas.

His face was drawn and pale. He shook his head emphatically.

“So why did the boat head out tonight, if the weather was still bad?” Sam shouted at the old man to make herself heard.

The roar of a full-blown storm lashed the catamaran and everyone onboard with fury. A couple of children behind us started crying. The captain switched off the engine. We were adrift.

“You said you wanted to go, right, Boss? I told the captain the foreigners want to go. He looked at the sky, but he also needs to make money. You know the storm will pass, don’t you? It will pass, if a foreigner decides to travel on this boat, right? We all trust you, that you make the right decision, right?”

His concern gave way to hope then and he smiled at us beatifically, wiping rivulets of water and spray from his face, “With foreigners on board, we will reach our destination, God willing.” 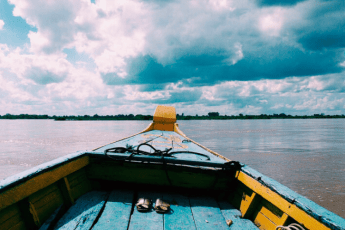 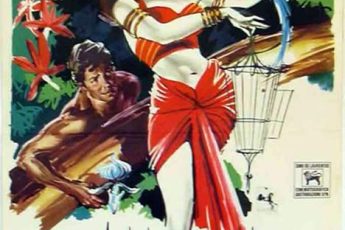